In the past few decades Luxembourg has developed into an attractive gateway for doing business in Europe, primarily thanks to its adaptive legal and tax system.

Luxembourg has been fairly prolific in signing tax treaties – 54 in place and eight pending, countries with which is has concluded agreements include Kuwait, Quatar and Bahrain. Hong Kong has been more reserved – 6 tax treaties in effect and 12 under negotiation.

Hong Kong and Luxembourg recently signed a tax treaty that opens up interesting possibilities for structuring Asia – Europe cross border holdings in an effective way. In addition, it will offer opportunities for transactions that go beyond Asia and Europe. For example, Hong Kong’s tax treaty with China creates structuring possibilities for Chinese companies that wish to invest abroad, as well as non-Chinese companies wanting to invest into China.

This article offers a brief overview of the tax regimes in Luxembourg and Hong Kong, as well as some details of the tax treaty.


The tax treaty covers a variety of areas; however, most striking are the important effects the tax treaty has on the local taxation of dividends, interest and royalties. They are reduced to attractive rates when paid from Luxembourg to Hong Kong and vice versa.


* The 0% rate will apply if the recipient of the dividends is a company that holds at least 10% of the capital of the company paying the dividends, or if it acquired its participation for €1.2 million (US$1.6 million approx.) or more.

Taking into account the provisions of the treaty, there are a number of potential opportunities.

Entities investing into China could opt to structure their investment through Luxembourg and Hong Kong, making use of the tax treaty and local tax rules. As an example, a private equity fund (often based in the Cayman Islands) could incorporate a Luxembourg company to hold a Hong Kong subsidiary to invest into a mainland China corporation.

Upon exiting the investment, capital gains realised by the HK company are tax exempt in HK and the dividends received / capital gains realised in Luxembourg can be tax exempt as well, provided certain conditions are met1. The repatriation of profits to the fund can be done with little or no Luxembourg withholding tax payable through hybrid financing of the Luxembourg vehicle. All profits attached to these instruments can be repatriated tax exempt (Equity Certificates).

International corporate structures channeled through Luxembourg and Hong Kong for China outbound investments can be interesting as well. Let’s compare the repatriation of profits from a European acquisition by a Chinese investor:

If done direct then the dividends paid by a EU target to its Chinese parent company could result in dividend withholding tax in the EU of 10-15%. 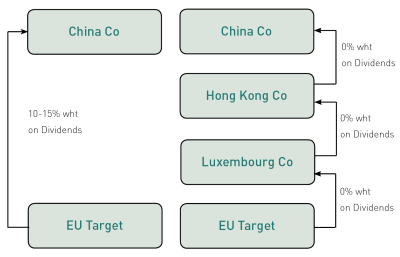 Similar situations may occur with acquisitions in other jurisdictions; this needs to be reviewed on a case by case basis. Please contact either Paul Lamberts in Luxembourg or Diederik Werdmölder in Hong Kong to discuss further.

Hong Kong has for centuries been an important gateway to doing business in Asia, due to its geographical location, reputable legal infrastructure and an attractive fiscal climate.